Psychologist as Warden? The Future of Corrections

Home / Opinions / Psychologist as Warden? The Future of Corrections

Psychologist as Warden? The Future of Corrections

By TIMOTHY WILLIAMS at the NY Times

CHICAGO — Nneka Jones Tapia, who runs the sprawling Cook County Jail here, has an indelible childhood memory of police officers pounding on the aluminum walls of the family’s double-wide trailer home in North Carolina, riffling through cupboards and drawers, and arresting her father on charges of selling marijuana.

Dr. Jones Tapia, then 8, had to call her mother home from work.

Over the next several years, other relatives, including two brothers, and a number of friends also spent time in jail. She says she might have ended up there, too.

Instead, she became fascinated by psychology and earned a doctorate. She began working at Cook County Jail in 2006, and this spring became its unlikely warden when she was promoted to executive director — one of the first clinical psychologists to run a jail, underscoring how much the country’s prisons have become holding centers for the mentally ill.

“It’s a national disgrace how we deal with this,” said Sheriff Thomas Dart, who appointed Dr. Jones Tapia to the post and who refers to the jail, a place notorious for its history of violence and overcrowding, as the largest mental institution in the country. He said that as many as one-third of the jail’s 8,600 inmates were mentally ill. 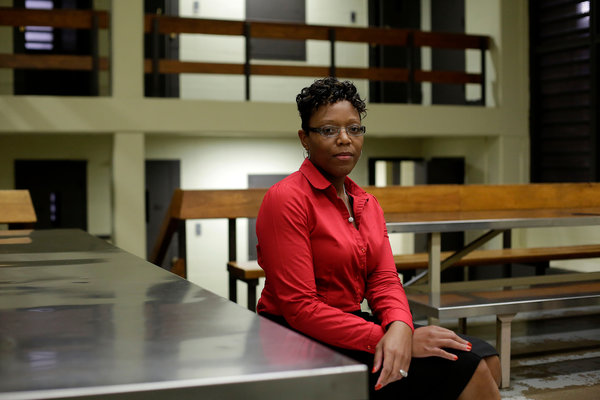 Dr. Nneka Jones Tapia, warden of the Cook County Jail. She is one of the first clinical psychologists to run a jail. CreditJoshua Lott for The New York Times

As she sat in a cellblock one day recently, Dr. Jones Tapia, 37, reflected: “I know all too well what it’s like to hope that your loved ones make better decisions. And I think about my own life and how I was probably one bad decision away from being in a correctional institution myself.”

As Congress embarks on a rethinking of the criminal justice system — including giving judges greater discretion in sentencing — jails and prisons are also confronting myriad problems in dealing with the mentally ill. There are now 10 times as many mentally ill people in the nation’s 5,000 jails and prisons as there are in state mental institutions, according to a study last year by the National Sheriffs’ Association and the Treatment Advocacy Center, a nonprofit group that supports expanded access to treatment. Such inmates are far more likely to be kept in solitary confinement and to be beaten by guards and other inmates, corrections officials say.

Some wardens complain that their jails have become little more than makeshift mental asylums, and that they lack the money and expertise needed to deal with the problem.

Before becoming warden, Dr. Jones Tapia oversaw mental health care at the jail, and under her guidance, Cook County began offering services that would have been unthinkable a few years ago. All inmates upon arrival now see a clinician who collects a mental health history to ensure that anyone who is mentally ill gets a proper diagnosis and receives medication. The jail then forwards that information to judges in time for arraignments in the hope of convincing them that in certain cases, mental health care may be more appropriate than jail.

“We’ve started to focus on the entirety of the system, from the point of arrest through discharge, and really forcing the whole system to take a look at the people that we’re incarcerating,” Dr. Jones Tapia said.

Officials have also discussed using a Sheriff’s Department van staffed with a therapist to perform house checks on former inmates, and if necessary, drive them to medical appointments to ensure that prescriptions are refilled on time, in an attempt to prevent them from turning to illegal drug use or other crimes that would send them back to jail.

Sheriff Dart, who has led the push for change here, says the jail has become a dumping ground for people who should not be locked up. 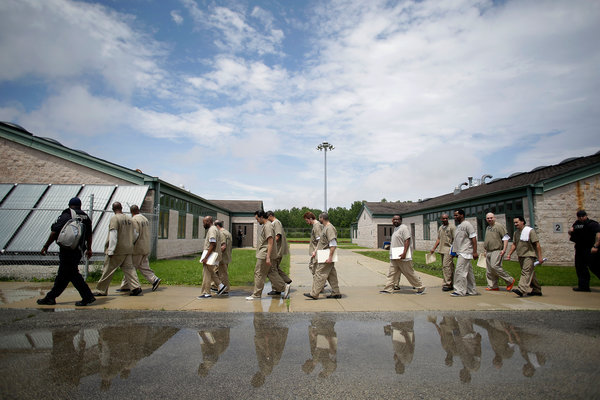 “The person isn’t choosing to be schizophrenic,” he said. “The vast majority of mentally ill people are here for nonviolent crimes, like stealing food to survive or breaking into places, usually looking for somewhere to sleep, or getting caught with drugs because they are self-medicating. How is it different than us locking up diabetics? Jails were never meant to be mental health hospitals.”

To press ahead with the jail’s overhaul, Sheriff Dart promoted Dr. Jones Tapia in May.

“We were looking for someone who could do the baseline things,” he said, “but who also had this other vision.”

Still, she is an unusual choice. Sheriff Jim McDonnell of Los Angeles County said a warden’s job was typically focused on security, although he acknowledged that having psychological expertise might prove useful.

In a callous effort to save money, the taxpayer is spending more money because it is much more expensive to jail someone then put them in a supervised living situation, and vastly more cruel.

“I certainly think the more tools you bring to the table, the better,” Sheriff McDonnell said. “But you are running a giant operation, and you need to keep things moving, to focus on security, to keep the staff motivated.”

Dr. Jones Tapia said that the whole time she worked at the jail as a psychologist, she had made a point of hanging out with corrections officers, and that had eased the transition to her new post.

“I think they welcomed the opportunity to share their world, and many of them, when they see me today, say, ‘I know you’re going to be all right because we taught you well,’ ” she said.

She also ended up marrying a corrections officer, Angel Tapia, a 12-year veteran of the jail.

Cook County Jail, though determined to improve conditions, remains a difficult place for inmates. Like nearly every large jail or prison in the country, it is riven by the same gang rivalries that plague the streets. The most violent and dangerous inmates are separated from others as they await trials or transfers to prison. 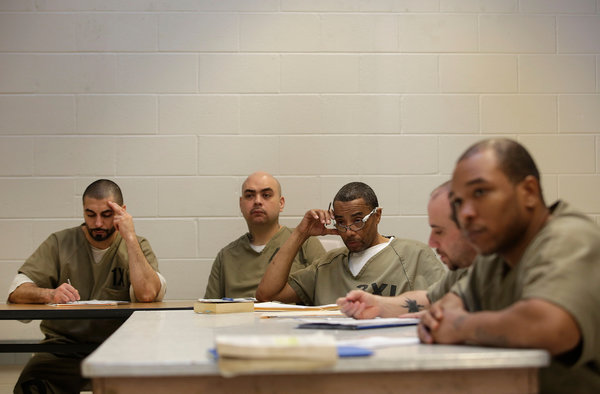 Inmates attend a session run by the jail’s mental health transition center, which was started by Dr. Jones Tapia before she became warden. CreditJoshua Lott for The New York Times

While the jail is far less crowded today than a few years ago, inmates — those who are mentally ill and others who are not — complain that they have too little personal space and too little time to exercise, and that courts take too long to resolve their cases, many of which are for minor drug, traffic or theft charges. The vast majority of inmates are African-American or Latino.

Some portions of the jail date to the 1920s and are falling apart in places. Leaking ceilings are dealt with by placing clumps of rags on the floor to absorb water. Walls and floors are cracking, and paint is peeling. In bathrooms, long rows of toilets a few feet apart lack partitions for privacy. Inmates have little to do all day, so they stand in front of television sets watching game shows and the news, or lie in their bunks and sleep.

For Dr. Jones Tapia, the path to becoming warden was not direct. After earning an undergraduate degree in psychology from the University of North Carolina, she said, she had no clear idea what to do next. She worked as a receptionist and in community mental health care before beginning to take more specialized psychology courses and going on to earn a doctorate from the Virginia Consortium Program in Clinical Psychology.

The program she is most proud of — and the centerpiece of efforts to overhaul the jail — is the mental health transition center, which started last August and was run by Dr. Jones Tapia before she became warden.

The warden said such inmates who were released without such services were often back within weeks as they amassed dozens, even hundreds, of arrests for petty crimes like shoplifting and drug possession because they were unable to obtain the prescription drugs needed to treat their condition. Many are rearrested just to receive treatment, so upon their release, inmates are now given a two weeks’ supply of medication.

“If somebody doesn’t have access to the basic tools to survive, they’re more likely to recommit a crime and come back,” Dr. Jones Tapia said. “So we know it’s not just a mental health problem. It’s more of a well-being problem.”

None of the 43 former inmates who attended the program before being released have been rearrested, said Ben Breit, a jail spokesman.

One of those former inmates, Demetrius Members, 23, who has been arrested 18 times, mostly for selling drugs, said he had recently been told that he had a severe case of depression in which he had nearly constant thoughts of suicide.

Mr. Members said that he had frequently used PCP and alcohol, which helped chase away negative thoughts, but that now, with the help of medication and counseling, he had enough confidence to envision a day when he would be able to open his own business, marry and become a homeowner.

“I hate I had to come to jail to learn this,” he said, “but who would have thought a program like this would be in a jail?”

A version of this article appears in print on July 31, 2015, on page A1 of the New York edition with the headline: Troubled Inmates, and a Psychologist as Warden . Order Reprints